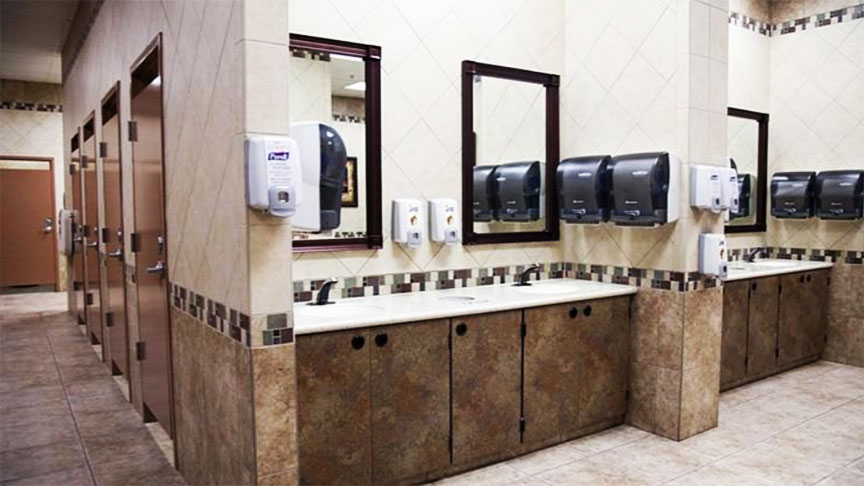 I have seen the future and it’s in the present in the bathroom at the Alamo Drafthouse at Mueller.

In an immodest proposal I floated in a recent column, I suggested it’s time to end separate but equal in bathrooms. Why, I wondered, do we have men’s and women’s bathrooms? Can’t we have one big room with individual, private stalls and common-area sinks, etc.?

This would end the debate over who goes to which bathroom. And it would end the unfairness caused by the fact that people who don’t identify as male or female now have no multiple-occupant bathroom to use.

Alamo Drafthouse is ahead of the curve on this. Previously unbeknownst to me (but beknownst to several readers who beknownsted it to me) Alamo Drafthouse, at its Mueller theater that opened in March, has precisely what I’m talking about. Readers also told me there are other gender-neutral, multiple-occupancy bathrooms around town.

I need to get out more often.

Alamo Drafthouse CEO and co-founder Tim League got some attention last year when he sought input on the gender-neutral bathroom concept, which became reality. I recently checked it out and found one big, clean room labeled “Restrooms.” It has fully-enclosed stalls with toilets and a separate room with urinals. There also are ADA/family rooms. The sinks are in a common area. Perfect.

League says it’s working well: “No complaints at all.”

Richard Weiss, the Austin architect who designed the bathroom, told me his firm gets about five inquiries a week from architects around the country seeking help designing gender neutral bathrooms. That includes a recent inquiry from the city architect for Jersey City, N.J., who had questions about converting City Hall bathrooms there to what Weiss calls “GeNu.”

Weiss has a unique insight into bathrooms: “In addition to being Alamo’s architect, I am in a ‘Hedwig and the Angry Inch’ tribute band, so I am familiar with having to use the men’s room in a dress and heels.”

Alamo Drafthouse patron Curtis Polk is a fan of the bathroom at the new Alamo Drafthouse, though he said it took some getting used to. “You do you your business and then you come out — and standing next to a woman kind of threw me off when I was washing my hands and looking into the mirror next to a woman.”

During my visit, I found it a little unsettling — but for no reason other than it’s just not what I’m used to — when I heard what sounded like a mom and a young girl in the room while I was in the individual stall. But really, what’s the problem with that?

And Polk said his wife found a healthy upside to bathroom unity. “It makes guys wash their hands because when you step out women are right there and it makes men feel more guilty” if they don’t wash, he said. “Seems like more men are washing their hands.”

At the end of my call for an end to separate but equal bathrooms, I invited readers to discuss this.

Some discussed. Some are disgusted.

Larry Knepper is OK with the concept: “However, if we ever go that way, do NOT remove the urinals!

Once women use our stalls, there will be something we guys have never had to experience in the past – LINES! I don’t want to wait in line for a stall just to get rid of the cup of office I had an hour ago.”

Barbara Garland said she recently used a gender-shared bathroom in Sweden: “While it was odd for us Americans, it wasn’t particularly uncomfortable. And the men had to endure the long lines, just like women have had to do forever. Seems like a win/win to me.”

But Jerri Matthews didn’t like her experience in a gender-shared bathroom at a restaurant in France where she discovered that some patrons, “men, I assumed, were lacking good aim. The floor was swimming in wetness.

“Having to slough through that in sandals wasn’t pleasant,” Matthews told me.

Sorry if you’re reading this at a meal.

Norma Kinney also had an overseas experience to share: “There are public loos on the streets of Europe. The feet and head (if occupant is standing) are visible. One gentleman doffed his hat to me as I was passing. Rather unusual, I admit, but not insulting to me.”

Ronald Sawey congratulated me “for not taking the obvious cheap laugh of asking about that pesky toilet seat and keeping it up or down.”

And Sawey had an idea: “Perhaps the seat could come spring loaded to keep it up unless one sits on it?”

Joe Kowalczyk is against my idea.

“Oh, Ken, NO! We need to keep separate and unequal as it is today. Just think how we men would be giving up on a quick pit stop,” Kowalczyk wrote, predicting longer intermissions at the opera and a need for a fourth-inning stretch at the ballpark.

OK, how about two bathrooms, one marked “Strange Men” and one marked ‘Everybody Else?’”

In pushing for the bathroom bill now before the state Legislature, Lt. Gov. Dan Patrick and other lawmakers said a law limiting transgender-friendly policies is needed to protect girls and women. Senate sponsor Lois Kolkhorst, R-Brenham, pitched it as an “opportunity to shut down predators and voyeurs.”

Reader Julia Spann, self-identifying as “a feminist and advocate for equality,” based her opposition to shared bathrooms on experience.

“All my husbands and sons (total of eight so far) have had one thing in common — the male propensity for belching, flatulence and expectoration. We shan’t discuss the universal aim problem. … It is best for all that they have their own facility,” she wrote, adding that she and her husband now have “his and her bathrooms” at home.

Hmm, I was unaware that some of those bodily functions are gender specific.

Let’s end with something on which everybody can agree. It’s from reader Louise Brown, an extraordinarily insightful human being.

“Thank you,” she said of my call for one bathroom for all. “Intelligence is in short supply these days and we should all celebrate displays of brilliance such as yours!”