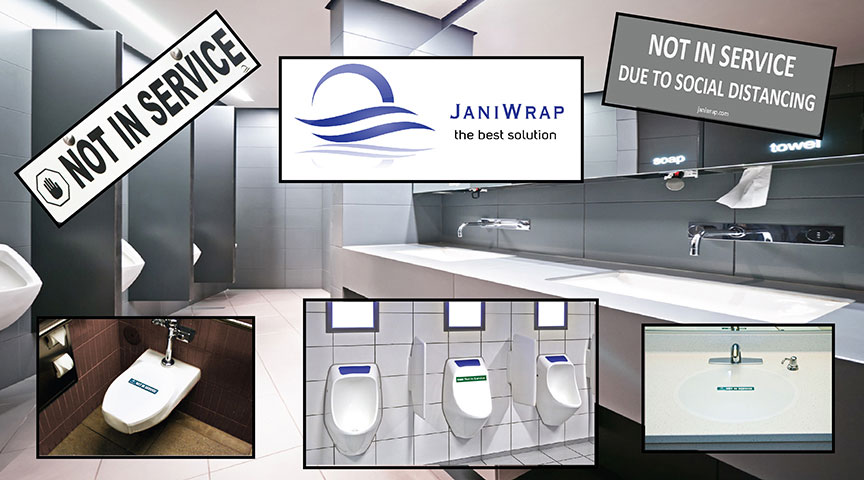 Note: JaniWrap receives no compensation nor has any affiliation whatsoever with the products mentioned in this article beyond our expressed opinion.

JaniWrap has deep roots in facilities management and as such we have a good understanding of what is involved in maintaining a clean and safe interior environment – including restrooms.

The janitorial market today is rife with tools and programs to ensure visiting a restroom is a pleasant experience and that there will always be plenty of tissue, soap and hand towels available for visitors and staff.

From sophisticated WIFI monitoring systems to elaborate training and old school cleaning schedules they all have one goal in mind, and that is to keep people safe and happy.

One of the first impressions people get when they enter a restroom that utilizes JaniWrap Toilet/Urinal Covers is that someone cares about their well-being.

Their visual senses are not assaulted with conspicuous garbage bags, caution tape, or other similar means of notifying them that a fixture is out of service.

Gaining people’s trust is arguably one of the most important facets of maintaining public restrooms, and first impressions go a long way in this regard.

However crucial the visual impact a restroom has on a visitor though, the maintenance routine to the fixtures, walls, surfaces and touch-points is equally important as each facet of care impacts the others e.g., surfaces must be cleaned prior to being disinfected to reap the full benefits of the disinfecting chemical.

There are many cleaning solutions and fast acting disinfectants available today with many products EPA rated to kill all manner of viruses including COVID 19, but they are not the focus here.

This paint is the first EPA registered paint that kills greater than 99.9% of bacteria (which causes odor), including Staph, MRSA, E. Coli, VRE and other pathogens.

The killing of these harmful bacteria on painted surfaces offers a new way to neutralize disease-causing bacteria on high-traffic/high-touch point surfaces.

This paint is most useful in areas of that support large groups of persons.

It’s also valuable when people know the extent the owner goes to ensure a safe environment for visitors and occupants of the building.

PreventX is an invisible antimicrobial finish that inhibits the growth of a wide range of bacterial and viral contaminants.

It provides a long-lasting protective surface not affected by regular daily cleaning and depending on the surface treated lasts 30 days.

…in a restroom or building that can be protected from cross-contamination and transfer for long periods of time and the man hours of cost savings not having to continuously wipe down surfaces only to have them ready to be infected all over again.

The level of care and concern for personal safety in public environments during this health crisis continues to be truly extraordinary and JaniWrap is privileged to be part of this tremendous campaign and doing our part in providing effective and  aesthetically pleasing products to enhance restrooms worldwide.

For more information on our JaniWrap business of out-of-order signs and temporary cover wraps for Public Restroom Toilets, Urinals and Sinks.

This is how I propose we solve the “Who gets to use which bathroom?” problem:

Dirty Bathroom Users: They go on the floor, and they certainly don’t wash their hands well, if an attempt is made at all. They touch everything before leaving (including the only handle available to open the exit door).

Clean Bathroom Users: Everything goes inside the porcelain. They always use the paper cover on the seat (no matter how difficult it is to place correctly). They flush the toilet with their shoe. They put the toilet seat down.  They wish to wash their hands with soap and hot water. Finally, they use a paper towel to touch the door handle as they leave.

With two young boys (one potty-trained & one in training) and a conscious effort to drink more than one gallon of water/day myself, I frequent public restrooms.

Until my sons get full control, they will sit down to use the bathroom.

Unfortunately, this means their soft, innocent little hands touch a lot of the seat and adjacent wall.  Disgusting!  Even worse, after completing their business, they typically struggle to reach the sinks, and I must either set them up on the dirty counter or prop them between myself and the edge of the counter to wash their hands. And wash their hands with what? Water that is usually cold to lukewarm at best, and does nothing to rid the bacteria.

Now, even if by God’s grace we managed to get all six of our hands satisfactorily washed clean and dried, how do we open a door that swings in and still keep all our hands clean?

Where on that door can I grab?

Is there a handle on that door that doesn’t contain a previous dirty bathroom user’s residue?

after themselves (or for clean-conscious users to attempt to clean a spot before use).

Keep in mind, some of the dollars you get to count before whistling on the way to the bank will come from hands that utilized your restroom facilities.

A thought occurred to me this weekend as I caught a snippet of the television program Bar Rescue, do women care more about restroom appearance than men?

Bar Rescue is a reality show highlighting a bar or nightclub that isn’t very successful. A team of professionals surveys the situation in order to diagnose & resolve the problem(s). At this point in the show, Jon Taffer, host and bar/nightclub consultant, had already pointed out sanitation issues with the main bar & food preparation areas, spotlighting the owner of the bar.

From there, he moved onto the women’s restroom to discuss the cleanliness.

I don’t remember the conversation exactly, but it was along the lines of, “You won’t get any women in your bar if the bathrooms look like this.” In response the owner just sort of stood with a blank expression on his face.

Taffer continued with disgust and irritation in his voice, “You can’t even tell that there’s something wrong with this bathroom, do you?”

Of course there are two things that can be addressed in my paraphrasing:

1) the conditions of the restrooms

2) the implication that women care about said conditions more than men.

First off, as a woman I do take public restroom cleanliness with a combination of hopefulness & trepidation. Will the restroom be clean or wretched?

I’ve covered how I feel about this subject in a couple of other blog articles: Public Toilet Seat Sanitizers – Do They Work or Is It Peace of Mind? & Would You Pay $1 to Use a Clean Public Restroom. As such, I can only imagine the general state of those restrooms if cleaning is subpar, never mind adding alcohol to the mix.

All I can think of is sticky, icky, and gross. I wouldn’t even want to touch the sink faucets with a 10-foot pole! Lots of bacteria, grime and organic material can build-up rather quickly in restrooms used by numerous people and aren’t cleaned very well or regularly.

Bar restrooms also have the potential for harboring additional organic materials associated with excess alcohol consumption that I wouldn’t exactly want to come in contact with… Restrooms can sometimes make or break a business, especially a restaurant, as Jon Taffer pointed out.

Repeat business is crucial, as is word of mouth.

No one is going to want to go spend a lot of time at a place that is not clean in general, perhaps with the exception of a dive bar. However, be aware that a dive bar also must be inspected by a state health inspector if food is served. If I were deciding where to go and someone mentioned that a place had bad bathrooms I’d definitely rule it out of the running and spend my money elsewhere.

Bad bathrooms are memorable, and not in the way you want them to be. On the flip side, a restaurant restroom can also be a selling point. I recently went to a cocktail bar for my birthday celebration with a couple of friends and we spent 5-10 minutes discussing not only the interior décor of the bar inspired by a vintage drugstore/pharmacy, which was awesome by the way, but we also talked about the floors in the restroom.

They were so unique and cool that one of my friends even went back in to take pictures of it!

The ‘tile’ of the floor consisted of nickels with some sort of epoxy coating to set them in the floor and provide a smooth surface for cleaning. One of my friends was extremely impressed that all of the nickels were perfectly spaced from one another.

Another thing that I found interesting while watching that scene on Bar Rescue was the lack of follow up in the men’s restroom; they didn’t even discuss it, not even in passing. Perhaps I missed that part, although I highly doubt it.

Men’s restrooms don’t seem to be a popular topic of daily conversation, and it made me wonder if most men care that much about restroom cleanliness. So I took a very informal & unofficial poll with a handful of my male coworkers, and while most considered restroom cleanliness to be of importance, they felt that in general it was a lot more important to women.

Some were more aware of restroom conditions due to it being an occupational hazard. One of my coworkers brought up a good point – if the restrooms are in terrible shape it makes one consider the condition the food preparation area is in.

To find out more about the products we sell for out-of-order toilet & urinal covers public restrooms JaniWrap Products.

Any cookies that may not be particularly necessary for the website to function and is used specifically to collect user personal data via analytics, ads, other embedded contents are termed as non-necessary cookies. It is mandatory to procure user consent prior to running these cookies on your website.