The early days of JaniWrap Out of Order Urinal and Toilet Covers were more research and development than order fulfillment and shipping.

The evolution from the original flat pad of covers to perforated covers on a roll was a lengthy process with a tremendous amount of sourcing and trial and error.

The excellent result of both applications was the same – it was the ease of use and method of application that was the challenge in the beginning.

If you were a first-generation supporter of JaniWrap, you remember the applicator tool used to transition the cover from the flat pad of covers to the toilet or urinal fixture was a cumbersome process compared to the quick method of applying JaniWrap today.

We appreciated the support of our early customers as they were willing to go the extra mile to achieve the results that today come considerably easier.

Our first adopters were visionaries like us and knew the end supported the means.

JaniWrap has always been a word of mouth organization with holistic growth – no public relations or marketing campaigns (beyond a little social media) to drive business.

So, new customers in those days were met with joy and high-fives and meant we could continue and press on!

Today the celebration of each sale is still ongoing as we strive to make restrooms aesthetically pleasing, not just in North America but worldwide.

The first Canadian shipment was an eyeopener of customs forms, duties, and taxes, but now we’re in many countries, including our important UK distributor.

JaniWrap is a family business focused on meeting the needs and expectations of every customer.

Before JaniWrap began, we always knew who our customers would be, and knew we would treasure the small operator every bit as much as big corporate folks.

Treating everyone the same is one reason we do not plaster our website with highly recognizable logos from our more famous clientele at the possible slight of Elmer’s Hardware Store in mid-town USA.

JaniWrap Covers protect the visual scenery in restrooms while effectively removing a fixture from service – you certainly don’t have to be a big corporation to appreciate the value JaniWrap brings to a property.

JaniWrap is an important tool utilized by savvy facility professionals across all spectrums.

Above all, especially during this time of uncertainty and challenge, let’s remember the Golden Rule and look beyond ourselves and extend grace and kindness to those around us.

As has been said, “We may all live on the same planet, but we each live in totally different worlds” – make your world a better place today. 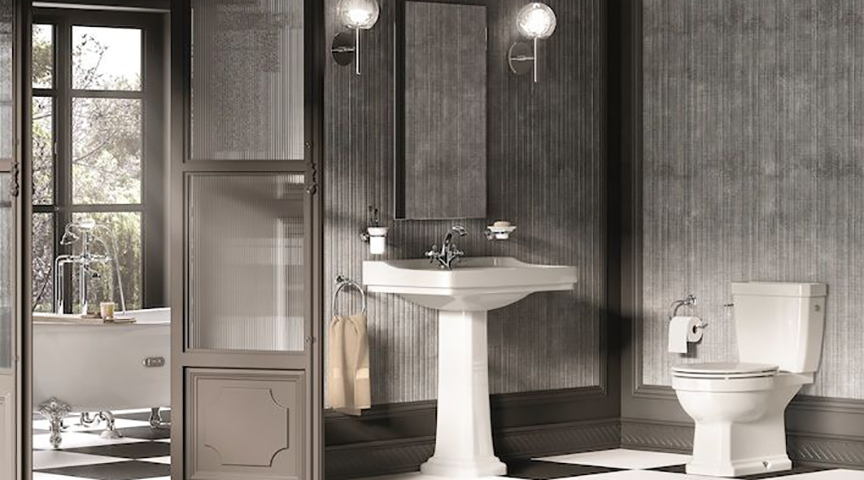 Why are Toilets, Sinks and Urinals Made of Porcelain?

Why are Toilets, Sinks and Urinals Made of Porcelain?

Have you wondered that yourself? Not only are our personal toilets and sinks in our bathrooms in our homes made of porcelain but so are most public restrooms.

We have been sitting on the same type of toilet thrones for centuries. Is there not something different that could do the same job in our modern times?

These bathroom fixtures need to be sturdy, waterproof, and in the case of a toilet and urinal, designed to be a flushing engine.

They are very efficient waste removers and there is a lot of intricate engineering behind your behind.

Vitreous china toilets (what we call porcelain) are made from clay and water. It’s a fairly inexpensive manufacturing process, which includes being poured into a mold, finished, glazed, and then sent through a kiln.

We use plastic on the seat cover on the toilet, but plastic is not durable enough to have it in the main role. Porcelain will not break under the weight of a hard landing.

Stainless steel toilets, like you see in jail, are very strong but are sensitive to temperature.

You do not want to sit on one when it is cold. Porcelain, not so much. Plus, they did not want to use something like porcelain that could be shattered and then the pieces used as a weapon in a penitentiary.

Rachel Swaby on her blog said: “Porcelain is a champ of shrugging off water. It may sound simple, but a porous material will allow liquid and bacteria in, so being impervious to both is important in a structure that’s main job is to deal with waste. The key to keeping water out, is in the porcelain glaze. After the toilet is coated, it’s fired in a kiln. Unlike, say, grout in a shower, which takes on both water and bacteria, the glaze stops bacteria at the toilet’s surface.”

A defective toilet is a bad thing no matter where you are when you need one.

In public restrooms it can be particularly annoying and unsightly so that is why Team JaniWrap invented and sells temporary out-of-order covers that can be used until the fixture can be fixed.

They are beautiful, do not take away from the overall appearance of the restroom, and are easy to apply.

People ask Team JaniWrap all the time: “Can you tell me why your temporary covers adhere so well to porcelain restroom fixtures?”

I always tell them: “It’s a proprietary blend of adhesives designed for instant tack, long adhesion, and clean release.”

A thought occurred to me this weekend as I caught a snippet of the television program Bar Rescue, do women care more about restroom appearance than men?

Bar Rescue is a reality show highlighting a bar or nightclub that isn’t very successful. A team of professionals surveys the situation in order to diagnose & resolve the problem(s). At this point in the show, Jon Taffer, host and bar/nightclub consultant, had already pointed out sanitation issues with the main bar & food preparation areas, spotlighting the owner of the bar.

From there, he moved onto the women’s restroom to discuss the cleanliness.

I don’t remember the conversation exactly, but it was along the lines of, “You won’t get any women in your bar if the bathrooms look like this.” In response the owner just sort of stood with a blank expression on his face.

Taffer continued with disgust and irritation in his voice, “You can’t even tell that there’s something wrong with this bathroom, do you?”

Of course there are two things that can be addressed in my paraphrasing:

1) the conditions of the restrooms

2) the implication that women care about said conditions more than men.

First off, as a woman I do take public restroom cleanliness with a combination of hopefulness & trepidation. Will the restroom be clean or wretched?

I’ve covered how I feel about this subject in a couple of other blog articles: Public Toilet Seat Sanitizers – Do They Work or Is It Peace of Mind? & Would You Pay $1 to Use a Clean Public Restroom. As such, I can only imagine the general state of those restrooms if cleaning is subpar, never mind adding alcohol to the mix.

All I can think of is sticky, icky, and gross. I wouldn’t even want to touch the sink faucets with a 10-foot pole! Lots of bacteria, grime and organic material can build-up rather quickly in restrooms used by numerous people and aren’t cleaned very well or regularly.

Bar restrooms also have the potential for harboring additional organic materials associated with excess alcohol consumption that I wouldn’t exactly want to come in contact with… Restrooms can sometimes make or break a business, especially a restaurant, as Jon Taffer pointed out.

Repeat business is crucial, as is word of mouth.

No one is going to want to go spend a lot of time at a place that is not clean in general, perhaps with the exception of a dive bar. However, be aware that a dive bar also must be inspected by a state health inspector if food is served. If I were deciding where to go and someone mentioned that a place had bad bathrooms I’d definitely rule it out of the running and spend my money elsewhere.

Bad bathrooms are memorable, and not in the way you want them to be. On the flip side, a restaurant restroom can also be a selling point. I recently went to a cocktail bar for my birthday celebration with a couple of friends and we spent 5-10 minutes discussing not only the interior décor of the bar inspired by a vintage drugstore/pharmacy, which was awesome by the way, but we also talked about the floors in the restroom.

They were so unique and cool that one of my friends even went back in to take pictures of it!

The ‘tile’ of the floor consisted of nickels with some sort of epoxy coating to set them in the floor and provide a smooth surface for cleaning. One of my friends was extremely impressed that all of the nickels were perfectly spaced from one another.

Another thing that I found interesting while watching that scene on Bar Rescue was the lack of follow up in the men’s restroom; they didn’t even discuss it, not even in passing. Perhaps I missed that part, although I highly doubt it.

Men’s restrooms don’t seem to be a popular topic of daily conversation, and it made me wonder if most men care that much about restroom cleanliness. So I took a very informal & unofficial poll with a handful of my male coworkers, and while most considered restroom cleanliness to be of importance, they felt that in general it was a lot more important to women.

Some were more aware of restroom conditions due to it being an occupational hazard. One of my coworkers brought up a good point – if the restrooms are in terrible shape it makes one consider the condition the food preparation area is in.

To find out more about the products we sell for out-of-order toilet & urinal covers public restrooms JaniWrap Products.

Any cookies that may not be particularly necessary for the website to function and is used specifically to collect user personal data via analytics, ads, other embedded contents are termed as non-necessary cookies. It is mandatory to procure user consent prior to running these cookies on your website.